During the Civil Rights movement of the late 1950s and 1960s, both Cross Street Church and Wesleyan became involved in another period of sweeping social reform. In early 1963, the NAACP organized a march from the North end of Main Street in Middletown to South Green. Black and white citizens, including those from Cross Street Church and from Wesleyan, marched together in support of civil rights for African Americans. In August of the same year, Middletown citizens, including Capt. Edward Jackson, Middletown’s first black policeman and a Cross Street Church member, participated in the March on Washington to protest racial discrimination and show support for civil-rights legislation that was pending in Congress. Rev. Martin Luther King, Jr., delivered his stirring “I Have a Dream” speech at the March on Washington. 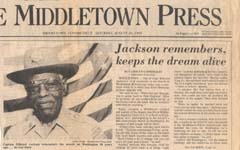 Rev. King visited Wesleyan several times during the early 1960s, and spoke to audiences of students, faculty, staff, and townspeople. In May 1964, he gave the baccalaureate address and received an honorary doctorate. Rev. King’s ties to Connecticut dated back to his teenage years, when he came North to work in the tobacco fields in the summer. His ties to Wesleyan began with his friendship with John Maguire, a religion professor, who had been Rev. King’s assistant before beginning his teaching career. John Maguire and David Swift, also a religion professor and an authority on 19th century African- American activist clergymen, joined the Freedom Riders and traveled to the South. On March 14, 1965, a civil rights protest of over 400 demonstrators marched on Middletown’s Main Street. Following a three-day conference at Wesleyan, protesters from Congress on Racial Equality (CORE), Students for a Democratic Society (SDS), Student Non-Violent Coordinating Committee (SNCC) and the Northern Student Movement were joined by over 100 Middletown citizens, both black and white. 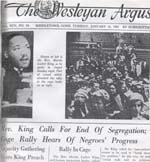 Rev. William Davage, pastor of the Cross Street Church from 1948 to 1955, founded the Greater Middletown Negro Youth Scholarship Fund, a program to help black high school students go to college. This fund, which began in 1965 and lasted for 25 years, helped about 50 students get an education. Members of the board of directors included Wesleyan professors Edgar Beckham and Wilbert Snow, as well as Cross Street Church members. In the same year, Wesleyan began to recruit African-American students actively. 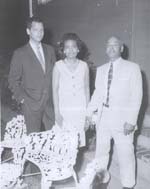 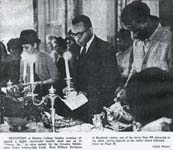