The A.M.E. Zion Church in Middletown may date back as early as 1823. Many sources, however, suggest that the first meetings began five years later, in 1828. Although the exact date of its beginning is not certain, we do know that several African-American men from Middletown assembled in the Cross Street home of Asa Jeffrey, a seaman, and his son, George W. Jeffrey, a laborer. Rev. James Anderson, a Methodist minister from New Haven, served as the first preacher, and the founding trustees were Asa Jeffrey, Joseph Gilbert, John Hamilton, Ebenezer DeForest, and George W. Jeffrey. Cross Street Church was one of the earliest black churches in Connecticut and the first in Middletown. Its original church building was completed in May, 1830, on a lot purchased from Henry Paddock a year earlier. This first church was located on the South side of Cross Street, facing what was then the head of Mt. Vernon Street, on a site that is today occupied by the Wesleyan University Science Center. 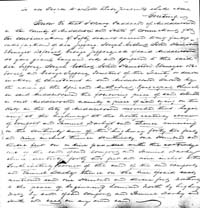 Cross Street Church grew alongside its neighbor, Wesleyan University. In the early years of both the church and the University, Wesleyan students, many of them already experienced ministers, often preached or led Sunday school classes at the church. They also collected a small library for the church members. By 1867, the congregation had outgrown the original 39’ by 31’ church, and a new, larger church was erected on the same site. A parsonage was built next door to the church in 1889. In the early 1920s, Wesleyan expanded, and the church was moved further west on Cross Street. In 1981, the church was rebuilt on the existing site, and the parsonage was torn down. 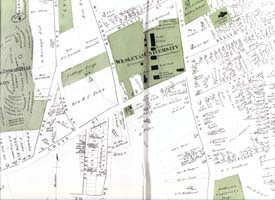